The Albergo Dolomiti is immersed in limitless wonderful woods. 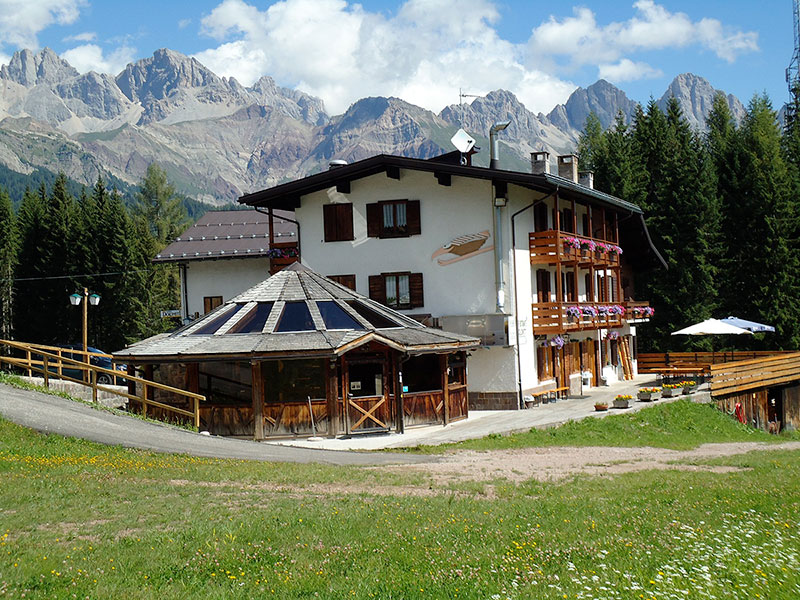 It's the perfect place for nature-lovers. The hotel's fabulous geographical position offers unobstructed views of the entire valley below and the spectacular mountains all around.

Located between the Pale di San Martino and Marmolada, this is an unparalleled destination for climbing and trekking enthusiasts, and for anyone who loves the mountains.

Indeed, in summer Falcade offers wonderful scenic excursions, with or without a guide, with plenty of mountain huts and farms ready to welcome those seeking close contact with nature and the mountains.

Sappade to Barezze
From Sappade or Valt (1302 metres) to the fabulous Barezze waterfall (1415 metres) on the Gaon river, via easy local roads and forestry tracks, through meadows and larch woods.

Valfredda to Fuciade
Departing from the Rifugio Flora Alpina and following a short grassy path uphill, we find a magical landscape: Valfredda and its famous "casoni" set against the green meadows and framed by the magnificent rocky cathedrals of Sass de Valfredda (3009 m). Continuing on the marked route 694, we arrive at the crossroads with route 670, leading to Rifugio Fuciade.

Gares waterfall
Among the numerous excursions in the valley bottom, the Gares or Comelle waterfall is a must: a truly spectacular sight that can be reached in less than an hour on paths of medium difficulty, either from the village of Gares or from the Capanna Cima Comelle in Pian de Giare.

Lorenzo Bottari
The Lorenzo Bottari mountain hut stands at an altitude of 1711 metres in a stunning position with views of the upper Biois valley. Starting at the village of Molino, it takes just over an hour and a half to reach and is run in summer by the Oderzo section of the CAI. The route to the hut is the first part of the long route known as "L'alta via dei pastori", marked by a white stripe between two blue stripes.

Gares to rifugio Rosetta
This is considered one of the most spectacular routes in the Dolomites; it starts from the village of Gares and takes four hours to arrive at the Rosetta mountain hut in the heart of the Pale di San Martino group. The route crosses an immense plateau at an altitude of 2000 metres, following signs marked 756; the path is mostly a wide mule track constructed in the years before the outbreak of the Great War.

Volpi - Focobon - Mulaz
Route number 722 departs from the Eden campsite in Falcade (1195 m) and leads to the G.Volpi mountain hut at Mulaz (2571m), owned by the Venice section of the CAI. This is one of the best-known mountain huts in the Biois valley area, partly for its location, right at the foot of the "trinity" of the Focobon, a symbolic mountain for the valley and among the most famous and admired in the Pale di San Martino group. Route 722 is undoubtedly the most direct route from the Biois valley up to the Mulaz hut, although it can also be reached from the Gares valley via the La Stia pass, on routes 754, 752 and 722, from the Valles pass on route 751 and from the Veneggia valley on route 710. These are the most popular access routes; other possible routes are advisable only for experts.

This website uses cookies to improve your experience while you navigate through the website. Out of these cookies, the cookies that are categorized as necessary are stored on your browser as they are essential for the working of basic functionalities of the website. We also use third-party cookies that help us analyze and understand how you use this website. These cookies will be stored in your browser only with your consent. You also have the option to opt-out of these cookies. But opting out of some of these cookies may have an effect on your browsing experience.
Necessary Always Enabled
Necessary cookies are absolutely essential for the website to function properly. These cookies ensure basic functionalities and security features of the website, anonymously.
Performance
Performance cookies are used to understand and analyze the key performance indexes of the website which helps in delivering a better user experience for the visitors.
Advertisement
Advertisement cookies are used to provide visitors with relevant ads and marketing campaigns. These cookies track visitors across websites and collect information to provide customized ads.
Functional
Functional cookies help to perform certain functionalities like sharing the content of the website on social media platforms, collect feedbacks, and other third-party features.
Analytics
Analytical cookies are used to understand how visitors interact with the website. These cookies help provide information on metrics the number of visitors, bounce rate, traffic source, etc.
Save & Accept